The Texas Music Educators Association (TMEA), founded in 1920, is an organization of over 11,000 school music educators dedicated to promoting excellence in music education. It consists of five divisions: Band, Orchestra, Vocal, College, and Elementary. TMEA hosted its annual convention on February 14-17, 2018, in the beautiful city of San Antonio, Texas. I was fortunate enough to attend this year’s convention for the first time. Having attended conventions hosted by the South Carolina Music Educators Association (SCMEA) and the Georgia Music Educators Association (GMEA), I had a general idea of what to expect from the convention’s schedule of events and activities. However, in many instances, I was still impressed by; the offering of relevant clinics, the overall organization of the convention schedule, the number of great concerts and showcase performances, and the large number of exhibitors in attendance. This article is sort of a snap shot or summary of the event. Hopefully, you will find some information in it which will help you decide if you should attend in the future (I think you should).

When registering for the event, I went to the TMEA site and was pleasantly surprised to see the number of hotels and the depth of registration information available. It was really a one stop shop and I was fully registered, with my hotel booked, in minutes. The convention was attended by just under 30,000 attendees so keeping things organized and well-planned was needed, not only to make for a nice event but for public safety as well.

As I arrived at the conference I was greeted with smiling representatives that directed me to a line of registration workstations. These machines simply scanned a QR code from an email that was sent to me a few weeks ago (when I registered). At that point my badge and information was automatically printed and I proceeded to the lanyard and convention schedule pick up area and it was done. That was the quickest I’ve ever registered for anything. It all took less than 10 seconds.

The convention schedule booklet was pretty thick, but luckily I didn’t have to haul it around because of the guidebook app for Android and iOS. TMEA added the convention schedule to the app which beautifully displayed the entire schedule of clinics and performances. It also notified you of schedule changes. For example, one night the exhibit hall hours were extended and I got a notification in the app which was very convenient.

Some of the world’s best clinicians and music educators were in attendance. Being able to walk right up to them at the end of their presentation to ask questions, or discuss current research topics, was an invaluable experience.

Each clinician presented an hour long presentation covering specific topics or approaches. Here is a sample of the type of clinics presented;

I especially enjoyed Scott Rush’s Presentation. Though I’ve read his book, I always try to catch the Habits of a Successful Band Director when in clinic.  He is the former Director of Bands at Wando High School in Charleston, South Carolina. I’ve observed a few of his classes when I taught in South Carolina. I always seem to learn something new every time I hear him speak.

Need I say more?… The TMEA Convention Exhibit Hall was filled with over 1,300 booths by more than 500 companies representing all facets of the music industry. It was really a sight to see! I tried to get around to as many booths as I could but four days just wasn’t enough time to get it all in while enjoying the clinics and performances.

There were over 100 performances by choral and instrumental ensembles from all levels of education (elementary through college). Too many to list here but, take my word for it, they were all excellent performing ensembles. There were also professional music groups like Black Violin that electrified audiences with full concerts and instrumental clinics.

I liked the fact that there was always someone performing somewhere in the building.

Performances by the Texas All-State Ensembles were special treats in themselves. There is no better way to close a state convention than by having the best student musicians in the state to perform on the final night. Awesome! Experiencing these performances makes this convention an unequaled opportunity for professional development and inspiration. All the students and directors of these schools should be commended.

The TMEA Convention’s website boasts that it is “The nation’s premier music educators convention”. Well in an effort to verify that claim, we sat down with Mr. Adrian Wright, an out of state attendee from South Carolina, to get his perspective…

Block Us Up! – Mr. Wright, I appreciate you taking the time out of a jammed pack conference schedule to do this interview with us. Could you tell us a little about your professional background, including your current position, and the students you teach?

Mr. Wright – I am a 1999 graduate of South Carolina State University where I received a Bachelor’s of Science Degree in Instrumental Music Education. I received a Master’s of Music Education degree from the University of North Carolina at Greensboro in 2005. I am currently in my 19th year of teaching. I teach at Dillon High School which is a Title I school located in Dillon, South Carolina. Dillon is a small rural town, located in the Pee Dee Region of South Carolina. I have approximately 65 instrumentalists in the band program. These students enjoy participating in the Wind Ensemble, Jazz Ensemble, and Marching Wildcat Band.

Block Us Up! – Did you enjoy the conference? What were some of the most notable moments you experienced?

Mr. Wright – This conference was one of the most enjoyable conferences I have attended. It met, and in some cases, exceeded my expectations. The concert by the University of Texas Wind Ensemble was amazing. Some of the most beautiful sounds I’ve ever heard. Scott Rush’s session on being a person of significance was really touching and inspirational. John Benzer blew my mind during his presentation on getting students to sound like professionals.. His attention to detail and the fundamentals of playing an instrument was awe inspiring.

Block Us Up! – What other conferences, clinics, or workshops have you attended and how do they compare to TMEA Convention?

Mr. Wright – Other conferences that I have attended similar to TMEA are the Midwest Clinic, in Chicago, and the South Carolina Music Educators Association (SCMEA) conference. At each conference I’ve met great people and have participated in inspiring clinics. When it comes to the implementation of technology, TMEA and the Midwest Clinic are ahead of the game compared to SCMEA. However SCMEA has been making great strides in this area the past few years. TMEA has the best flow chart in regards to access to the exhibit hall, registration, and the actual clinics. I think TMEA had more performances than the Midwest and SCMEA. Particularly when you take into account the small ensemble groups. With over 30,000 people in attendance, I think it’s safe to say everything’s bigger in Texas, lol.

Block Us Up! – Is there anything you learned, by attending sessions at this conference, that you feel will benefit your students? If so, how do you plan to implement?

Mr. Wright – Dr. Brett Richardson of the University of the Incarnate Word presented a clinic on score study. During his clinic he shared a rehearsal guide that I plan to use to help guide and focus our daily classes and after school rehearsals. I anticipate more efficient and effective rehearsals. There were also some tidbits I gathered from multiple presentations in relation to tone production and flexibility on the clarinet and flute that I plan to relay to my students in hopes of improving their playing ability. Those are just a few. Once I sift through all of my notes and handouts, there are other things that I plan to implement but they allude me at present.

Block Us Up! – Mr. Wright, it is always a pleasure. I appreciate you taking time out of what I know is a full schedule of activities to do this… Are there any words of advice you could leave any of our younger or less experienced directors out there?

Mr. Wright – Never stop learning. Don’t be afraid to venture out to other states to participate in their conferences and conventions to get a different perspective on our craft. Music is Life and Life is Good.

Mr. Adrian Wright is a South Carolina music educator with over 19 years of experience. His bands have enjoyed years of success and have been rated superior, with distinction, at SCBDA Concert Assessment. Under Mr. Wright’s leadership, The Dillon band has become the only Traditional program to win the prestigious South Carolina Band Directors Association’s Outstanding Performance Award. Mr. Wright is founder and creator of the largest, professionally adjudicated, event for traditional bands in the country, The Dillon Battle Of The Bands, which is in its 13th year of existence. Mr. Wright is happily married to Kadra McQueen of Dillon, South Carolina. 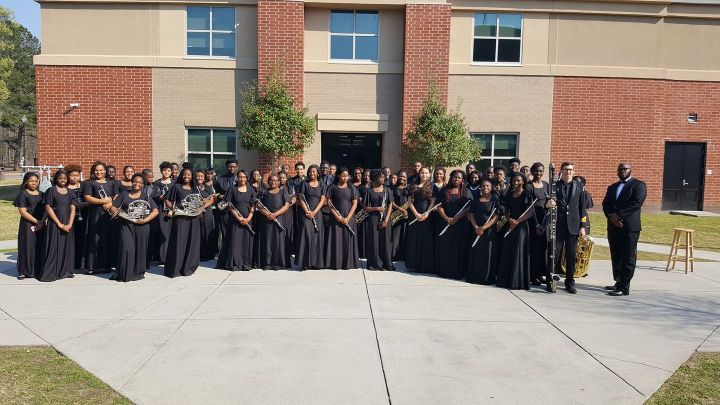