Have you noticed that marching bands are getting smaller these days? I know there are exceptions but, generally speaking, bands of today do not enjoy the musicality or the numbers of programs of just 20 years ago. I have a theory of why this is happening…

Once upon a time, it was popular to use your marching band (the most visible ensemble on campus) to display the talent and depth that existed in your entire band program. Schools across the country, proudly, touted the talent level and size of their marching bands. In the early days it was impressive for a school to field a 100 member marching band. Schools across the country were in a race to do just that… And they were all calling themselves The Marching 100… or 101… or 110… It was crazy. 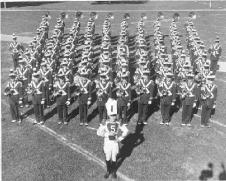 Having over 100 musicians playing some of the most challenging band music ever written was a symbol of superiority and academic prowess. Those bands proudly played through famous marches and traditional selections to prove to the opposing school’s band, and their fans, exactly who was the superior ensemble. They also played popular selections that were arranged in a way that challenged the musicians and elevated the musical palette of the audience… Even a football game audience. Directors of the time coined the phrase “edutainment” as the primary focus because the band was not only there to support the team and provide halftime entertainment, but also to educate the audience about genres and styles that they wouldn’t ordinarily be exposed to.

“All good things must some day come to an end…”

I can’t put a finger on when it happened, but at some point during the last 3 decades a paradigm shift occurred. The marching bands slowly took a back seat in the hearts and minds of many music educators and then also the public. Collegiate music programs were restructured to focus more on the chamber and wind ensembles. Most college marching bands were handed off to the newest or most inexperienced staff members (or kicked out of the music department all together). The new title: “Athletic Band” was created to effectively reassign the marching band to the department of athletics. Gone are the days of the Department Chair being the legendary band director which propelled programs to the world stage (ie. Dr. Revelli, Dr. Foster, Dr. Greggs, etc…). Now, The Department Chairs and Band Directors are often two different individuals.

As future high school band directors graduated from college, many carried with them an underlying resentment of “having to do” marching band. It was a 6 day a week chore that was very tiresome and expensive if done at any competitive level. They would much rather spend that time preparing for concerts, honor bands, arranging, creating, etc.. The smaller ensembles (concert bands and wind ensembles) became the platforms for true musical excellence and the music educator focused all their attention there, if they were serious directors. It was also less expensive and easier on the music educator’s personal life. A director could actually have a social life, what a novel idea… It made sense to make it the focus of the program.

On the collegiate level the marching band was painted as a group of mediocre musicians, mostly non majors, spending countless hours perfecting drills and music that never climbed above a grade III. Seriously, this is what all the other majors in the music department thought of the “band students”. This mentality spread throughout communities and people started agreeing with it…

“Why do we need marching bands anymore? Why should we fund them?”

What we fail to realize is, to most, the marching band is still the measuring stick of exactly what we do with our students all day. It is the most visible ensemble under our direction and it will always be, no matter how hard we try to convince people otherwise. Sometimes our funding, our support, and even our jobs depend on what the average person thinks of our marching band. It is a current trend to focus less on the marching band and more on the wind ensemble but I don’t agree. I think it’s important to focus our attention equally on all ensembles of the band program while remembering what sells tickets. In order to have that superior wind ensemble, you’ve got to have butts in seats. An ensemble that “hooks” the students with something exciting and rewarding may be a cool way to strike interest in the total program.

I always hear colleagues say students are not the same as they were years ago and that millennials are allergic to a little sweat, grass, and dirt. Lol… Kids may have changed, but have we changed as well? Have we restructured the band program in a way that allots for the very things we complain about; lack luster participation, no funding or support from the school, no sense of school pride or esprit de corps amongst the students? I think we have… Nobody’s purchasing $60,000 band uniforms for a band they don’t like… We must get back to giving the students, school, and community a kick ass marching band to be proud of while we enjoy our nice wind ensembles.